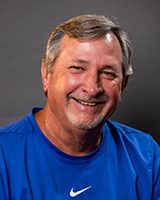 His career started in 1991, and 30 years later, Trinity Christian Academy Head Football Coach Verlon Dorminey began the 2021 season – his 31st at the helm – with a record of 296 wins and only 77 losses.

The Conquerors won a nail biter against Raines in the season opener. Trinity then handed Coach Dorminey wins #298 and #299 in running-clock fashion in Weeks 2 and 3.

Win #300, though, would not come so easily in Week 4 vs. Clearwater Academy International, but come it did. Sixty minutes of gut-wrenching football were not enough, however. It took an overtime possession, a field goal, and a defensive stop to finally get Coach Dorminey that milestone win and make him the 7th head coach to win 300 games in the State of Florida and only the 4th to do so for one school.

Trinity defeated CAI 53-50 in what may be the most exciting game Verlon Dorminey has ever coached – regular-season, playoff, or even championship game.

Kicker Seth Bialek converted a 29-yard field goal on 4th and goal from the 12-yard line, and the Conquerors led the #26 team in Florida 53-50. Trinity, the State’s #35 team, still had to stop a powerful offense that had already scored 7 touchdowns, 3 on the ground and 4 through the air.

Clearwater advanced seven yards and had third and goal at the 3-yard line. Quarterback Luca Stanzani swept right and crossed the goal line for an apparent game-winning touchdown. However, a holding penalty right where Stanzani crossed the line nullified the play, and the Conqueror defenders had another opportunity. Add an unsportsmanlike conduct penalty after the play, and Clearwater now faced 3rd and goal at the 28.

Stanzani escaped pressure and sprinted toward the end zone only to have TCA linebacker Caden Morrell catch him from behind at the 8. On 4th down, Stanzani’s rollout pass to receiver Dylan Djete in the endzone went through Djete’s hands and fell incomplete.

The celebration then began.

The entire game was a seesaw affair that either team could have won. In fact, Clearwater took the lead at 50-43 when Stanzani and Djete connected on a 58-yard touchdown catch and run. Trinity’s defense, though, stopped the 2-point conversion and kept the score to a 1-possession margin.

That stop proved vital and could easily get lost in the wildness of the evening’s battle.

TCA running back Darnell Rogers punched in the game-tying touchdown (with Bialek’s PAT) from 1 yard out to cap a very methodical 13-play, 64-yard drive, and the score was tied at 50.

With 2:58 remaining and all 3 timeouts available, Clearwater had one last chance to win in regulation. The Knights returned the ensuing kickoff to their own 33. They drove straight down the field 56 yards in 10 plays to the Conquerors’ 4 but dropped the ball with 6.4 seconds left on the clock. Morrell recovered his 2nd fumble of the night to force overtime.

Clearwater scored first after recovering their own opening kickoff at the Trinity 31, and Merton Theagene rushed in from 12 yards out. The Knights were without a kicker and went for 2 after all 7 of their touchdowns, succeeding this time and on 3 more occasions.

Trinity responded immediately on the ensuing 60-yard drive that culminated in Rogers rushing one in from 28 yards out. Bialek’s 34-yard field goal later in the quarter gave Trinity a short-lived 10-8 lead, but a Stanzani-to-Djete 23-yard TD pass gave the lead back to Clearwater at 16-10 after the 2-pointer with 1:33 left in the first.

Theagene put the Knights ahead 22-10 on a 3-yard touchdown run with 8:53 left in the 2nd quarter, but Trinity stopped the 2-point conversion. Rogers then scored his 2nd touchdown of the night on a 1-yard rush to make the score 22-17 Knights.

The two teams traded touchdowns in the final 7 minutes before halftime. Stanzani found Jack Gutek from 47 yards out (2-point attempt failed), but Trinity’s Colin Hurley hit Fred Highsmith for a touchdown pass of 28 yards (kick blocked), and the teams went into halftime with the Conquerors trailing 28-23.

The Conquerors outscored Clearwater 20-8 in the 3rd quarter. Highsmith caught his 2nd touchdown pass from Hurley (14 yards), and Xander Ross took a handoff from Hurley in for a 5-yard score to make it 36-28 Trinity. After Theagene’s 5-yard touchdown run and his own 2-point conversion tied the score at 36-all, Hurley found Darius James wide open in the end zone for a 17-yard pass to put the Conquerors back into the lead at 43-36.

Stanzani hooked up with Djete from 19 yards out to pull Clearwater to within 1, and the 2-point conversion gave CAI the lead at 44-43.

Ross caught 10 of 11 passes his way for 148 yards (plus a rushing touchdown) to lead Trinity, and Djete had 5 receptions totaling 120 yards and 3 touchdowns to lead the Knights.

Morrell totaled 16 tackles and a pair of fumble recoveries for the Conquerors, and Tre Stewart jumped on a third. Tyler Jackson intercepted a pass, and the defense totaled 6 passes defended. Clearwater’s defense knocked down 4. Cameron Anderson had 13 tackles for TCA while Jonathan Goddard and Keaton Thomas each had 11.

So many more players on both teams made big plays and put up some hefty numbers.

Congratulations to the Conquerors on their most exciting win and to Coach Verlon Dorminey on earning his 300th victory as a head coach -- in such heart-pounding fashion. 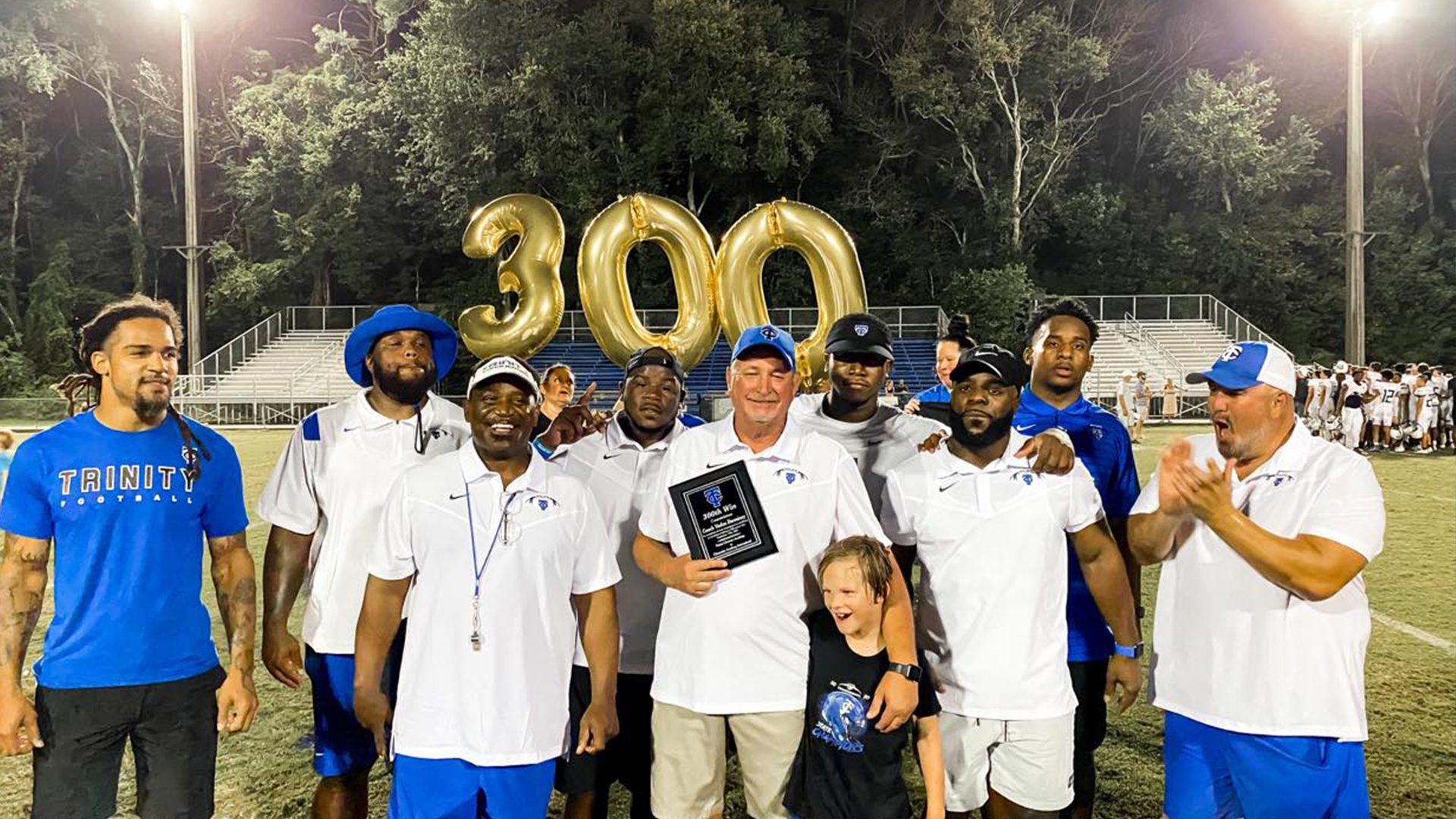 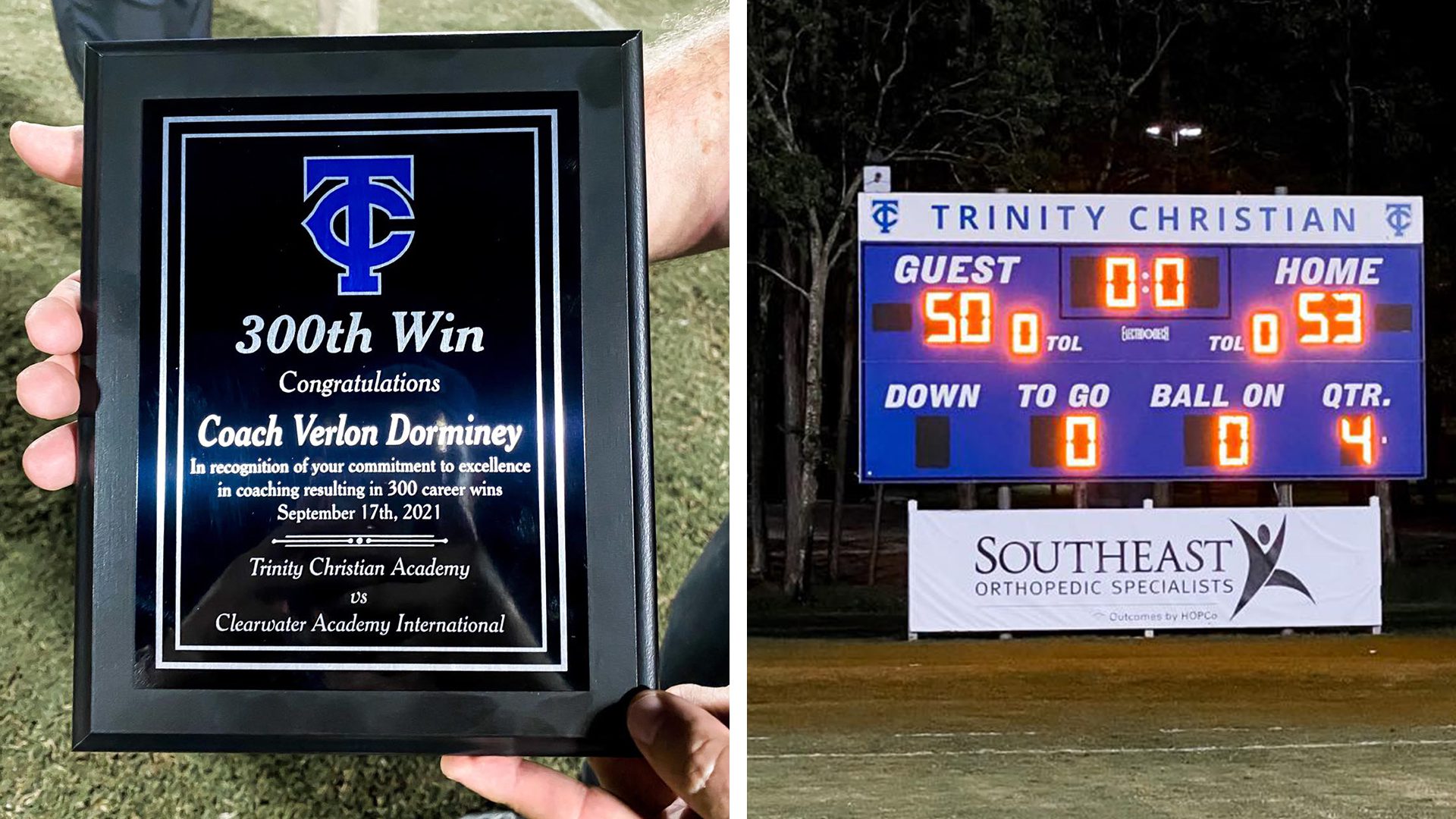